Amarok always had the reputation of being the most popular and powerful audio player available on the Linux platform, and it really deserved that position. I myself am a fan of Amarok for over three years now, and there was nothing I could think of which Amarok 1.4 did not have. 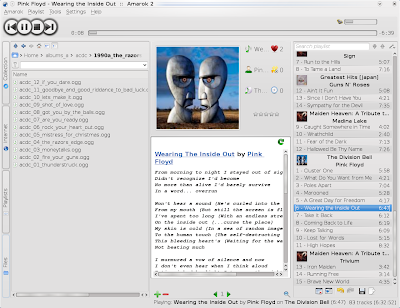 For this review I used Amarok 2.0.2 (which was released to the public on March 5), included in Kubuntu 9.04 Beta (with all the upgrades to date) and I scanned several Ogg Vorbis and FLAC albums, all of them with correctly filled-in tags. I also included a compilation with several artists, which from the start messed up the entire playlist. That is, the albums from a single artist were correctly displayed, while the compilation album was spread in the entire playlist (see the screenshots below). In fact, Amarok only tries to organise tracks on the compilation depending on the artist. So if we have three artists with two songs each, they will be spread in the playlist, sorted by artist's name. Although I like how the single-artist albums are displayed in the playlist, when it comes to compilation this approach tends to mess things up and look inconsistent. 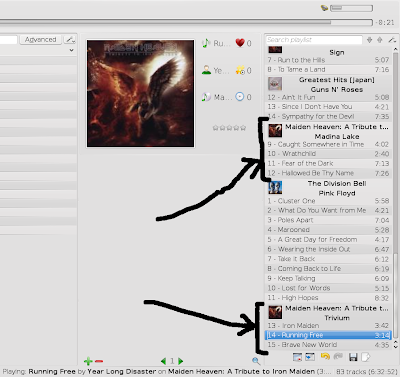 The current version of Amarok 2 does not include all the features 1.4 had, like the equalizer, statistics or queue manager, however it is a new foundation for the releases which will follow. The introduction of widgets is very useful if you ask me, and I also liked the new interface. I know there were a lot of people complaining that the central widget space is a waste and takes up too much of the area when the playlist could have been, but I think it's useful this way. The new approach gives Amarok a more organised look and a logical way of finding all the information one needs at any given time. 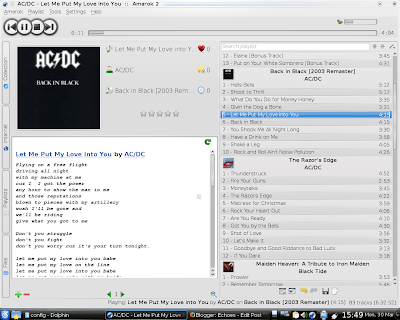 Another thing which I miss from Amarok 1.4 series is the ability to go directly to the next and previous tracks in the tag editor. That was a cool feature which made Amarok my audio tag editor of choice. Still, it allows for mass-tagging, which is a good thing. Of course, I'm sure these things will be implemented in the future.

Amarok correctly auto-detected the covers inside the albums' directories and displayed them in the middle panel, which proves to be very useful if used with a lyrics widget, for example. 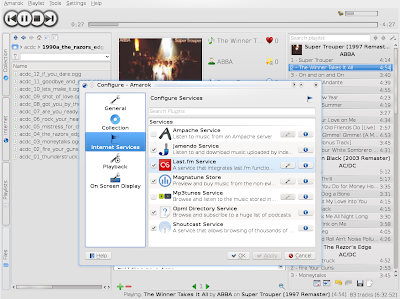 The collection tab resembles pretty much the one in 1.4, however instead of organizing artists from the compilation albums inside that album's title, they are spread all over the place. This can get extremely annoying if you have large compilations of, say, 50 or more artists, and only a few songs from each of them. Or at least, I liked more the approach in 1.4. After an application restart Amarok did not remember the position of the left tabs, which were disabled (the Collection, Internet, Playlist and Files tabs).

The Add Media... option in the Playlist menu will only allow to add files to the playlist, so I had to use the right-click menu option Load (or Append to Playlist) from the Collection or the file manager tabs.

Some of the old features are still available, like the cover manager (which hasn't changed a bit) and the file manager. I was happy to see the old bug which froze Amarok (at least on Debian Lenny - stable) when right-clicking on a song and going to Edit Track Details in the file manager disappeared. Well, since it was rewritten it is normal to be this way.

A whole bunch of other features are now included in Amarok. Except for the widgets, the Internet tab provides access to no less than seven services, like Last.fm song submission and integration, music from Magnatune.com and Jamendo.com, OpmlDirectory (for lists of podcasts) or Shoutcast Directory (for lists of online radio stations). The script manager also allows to download other scripts from the Internet directly from within Amarok, and they are installed automatically, just like in 1.4 (and with a refined interface, cutting off the additional - and useless - steps when you had to click twice OK - once when the script was downloaded and the second time to notify you that the script was successfully installed).

Amarok now uses only QtScript, so all the scripts for 1.4 had to be rewritten. No more support for languages like Perl, Python or Bash.

Conclusion
As an Amarok 1.4 fan, I must say I also liked Amarok 2 a lot, but there are a lot of things which really need to be fixed and features to be added. What I like the best is the new approach (yeah I know there are a *lot* of people who don't like the new look), but it seems to me the way the widgets are organised and the space management is much more compact and useful now. The playlist is definitely another plus, since it looks twice as good as that simple list in Amarok 1.4 and offers a more clear view on which album belongs to which artist. It is visually more appealing. Instead, it really needs a fast way to jump to song using the keyboard. 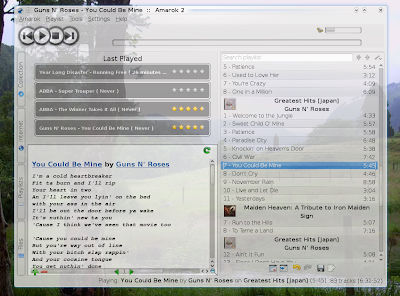 I'm looking forward to Amarok 2.1 and I hope only for the best from the team behind this loved and popular player. 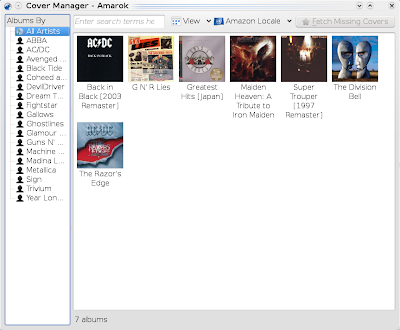 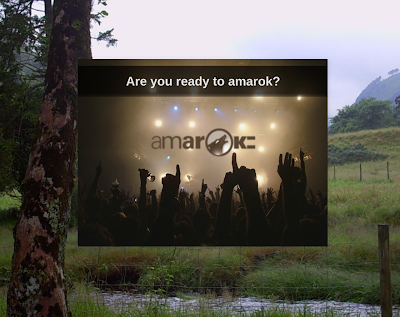 Last.fm integration, together with song submission and radio stations access 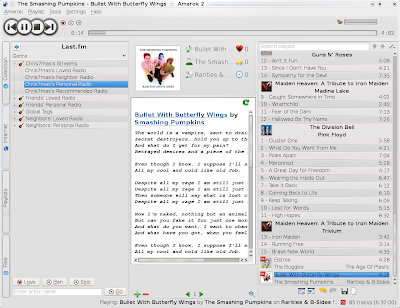 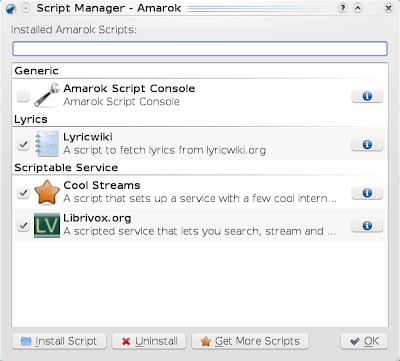