An Introduction to IRC on Linux for Beginners

IRC (Internet Relay Chat) is a protocol for text-based internet chat created by Jarkko Oikarinen in 1988. Ever since it was developed, IRC gained more and more popularity and currently it's one of the standard ways for projects and distributions to provide online help, for developers to meet and discuss aspects regarding their work.

Two of the well-known networks dedicated to free software and Linux in general are Freenode and OFTC, the latter being the network of choice for the Debian distribution, which switched from Freenode a couple of years ago.

To connect to an IRC server, you will first need a client. There are several good IRC clients for Linux, however I will discuss here the basics for two GUI (Graphical User Interface) clients: XChat and Konversation, and one CLI (Command Line Interface) client, and that's the powerful Irssi.

Introduction
The IRC protocol as a concept is very simple: you send in raw lines of text, the server interprets them and eventually performs some action, such as giving a channel list, or sending your message to the users in an entire channel etc. The IRC client is here to ease your work, so instead of sending a little more complicated command in order to send a private message to someone, you will only have to type something like /MSG [nickname] 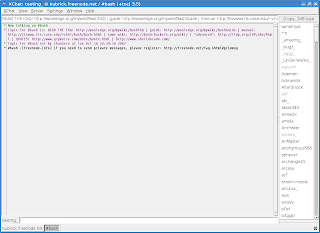 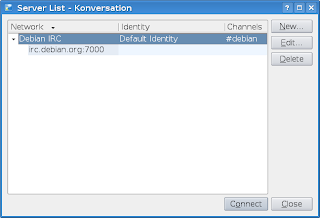 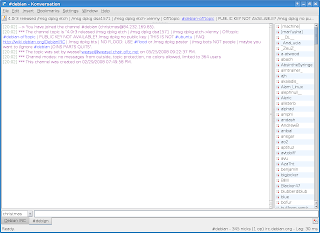 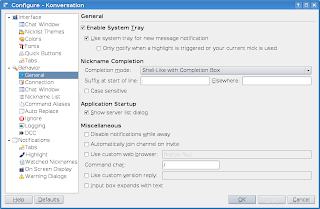 Konversation 1.1 for KDE3 is still in development, and the latest stable version is 1.0.1. 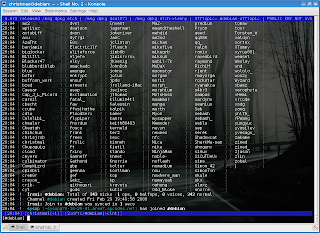 ummm why is there no mention of Pidgin at all ?

There is, just at the end of the article, where I listed several others clients. I know, there are probably 10 other, or maybe 20, but those are the only ones I used and cared to mention.

For newbies like me, lostirc (http://lostirc.sourceforge.net/) is the best: simple, fast, lightweight - gets the job done.

My problem was that my name was used and I had to authenticate or something .. I hoped you would explain how to do that sanely :(

Good article, thank you much. I'll bookmark this for sending to people wanting to learn IRC.

@Kragil, usually when your nickname is already used the client will switch automatically to the second alternative (if available, see in your client's options, for example in XChat it's in XChat -> Network List). If not, then you can change your nick manually using /nick new_nickname or just fill in the fields in options and connect again. As for authentication, it's not mandatory, but on several networks like Freenode or OFTC it's recommended to register your nick. Just choose a nickname which is not already in use or registered and type /msg nickserv identify password email.

@Garoth, thanks. Chances are in the near future I'll make a much comprehensive guide, with a little more explanation and eventually include basic instructions for more clients (either editing this post or creating a new one).

@kragil. While it's not mandatory on almost all networks that you don't authenticate or register your name (nick) on some of the larger ones like DALnet and Undernet will often check on new nicks they see with a /WHOIS.

The idea here is to stop spammers and related types.

Where I op if you're neither registered or logged in (authenticated) I'll often message you to ask you some questions. Often to determine of you're a bot or something similarly unwanted.

It's also a good security measure for you.

/connect and /server do *not* do the same thing!