Review
This is the third notes-taking application I review, after the splendid BasKet and Tomboy for GNOME. The latest version is NoteFinder 2.5, and you can download it from here.

NoteFinder is written in Python and it uses the Qt 4 libraries. The main difference between the other applications for taking notes is the interface, which includes a big calendar by default occupying half of the main window. 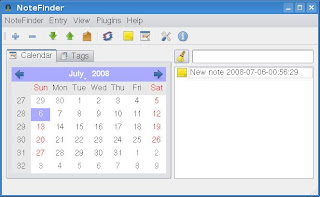 Although the version number might give the impression that this is a complete application, NoteFinder offers just basic features and no configuration options. I liked that taking notes is handled in two ways: you can add your notes in a rich text format or using the wiki source style. Which got me a little confused over this feature's usefulness. 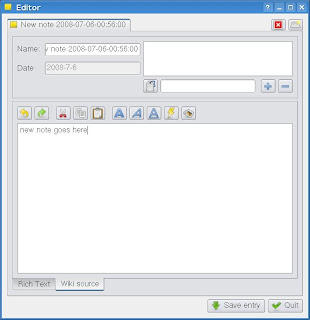 As a conclusion, when I saw the screenshots on kde-look.org I was enchanted to try it out, but after using it for about 10 minutes I came to ask myself whether it's useful or not. It's obviously it's still in development and it misses a lot of features and functionality. Anyway, if you want to give it a try, follow the steps below.

Installation on Debian Lenny
Note: This how-to may also work on Ubuntu and other Debian-based distributions. For other distributions, just search for python qt4 and install the library with your package manager.

Next, download the source from here. Uncompress it, and run the install.sh script inside the notefinder-2.5 directory as root:

It's better to keep the prefix to /usr/local/ instead of /usr/.

However, as pointed in the comments, installing in /usr/local/ will raise some icon problems. The screenshots above were taken with NoteFinder installed as:

Run it as notefinder from any terminal application or type ALT+F2 and enter notefinder in the Run dialogue.

Hi, I'm NoteFinder developer. I've read you post and I can't understand you. First of all, you should install NoteFinder by typing './install.sh /usr' as it's written in README and at kde-apps.org. Prefix option was added in 2.0.1 for package mantainers, not users. Installing it into /usr/local caused problem with icons. Secondly, there are some keyboard shortcuts, for example Ctrl+N for creating new note, Ctrl+R for deleting note, and so on. I don't rdalize why you didn't find them. And finally, NoteFinder code is absolutely complete. You said it has only "basic features". It has such not "basic features" as tagging, search (over names, creation dates, tags, text), finding related notes, Wiki markup, database management - backup and synchronization, import/export, multiple profiles management, etc. Any additional functionality can be provided as plugins (it's very easy to write them). Please show me another one Linux note-taking applications that has all features listed above.
And *please* answer me, what functionality are you missing?
Yes it's sad to see such an incorrect review of your program... :(

Hi. You're right about shortcuts, I just missed them. I should have looked more careful in the Entry menu. However, I couldn't find a way to configure it via the Preferences menu (after restarting it there is no profile available). It's great to see another new application for taking-notes, but it just didn't feel very right, the interface and the big calendar. Hopefully you want take the review as a personal or negative critique, what I was trying to say is that it's different from other notes applications I tried (BasKet, Tomboy), at least for my taste.

Again, the mention about shortcuts was my mistake indeed by not paying attention enough to it and I'll shortly remove it.

Thank you for the feedback.

Also regarding the shortcuts: are they configurable? Global shortcuts? Default plugins coming with the package?

Currently they are not configurable (I thought it'snt need), but I can add this in future releases. There are currently 2 plugins - Export2HTML and ClipboardCapture - they're in plugins/ directory. Also (please), install it normally (as I'd told above) and replace screenshots. They can disattract users...

OK, fair enough. But here's the problem: I know usually applications not included in the repositories should go to /usr/local instead of /usr so they won't get mixed with the ones installed via the package manager.

Now the problem is at those icons (after installing in /usr they appeared and the application itself started to look better). Are you going to fix this? So it can be installed in /usr/local without icon problems?

I mean, if NoteFinder will be included in Debian's repositories at some point in the future.