Amarok 1.4.9.1
Amarok is a very widely used player for KDE. Among the many features it ships with, the notable ones would be a very powerful collection management system, scripting, Last.fm song submission, Magnatune shop, lyrics, cover and Wikipedia information fetching, cover manager and statistics. I must admit I just love this player and I have been using it for two years now. It's improving with every version, and, as the official release announcement says, 'there are no more bugs in Amarok 1.4; it is perfect, like a lotus flower.' It is, indeed, very stable. Currently the most popular audio player on Linux, with over 50% share, Amarok is in heavy development for the brand new 2.0 release for KDE4.
Official Website 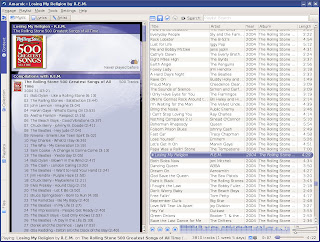 Banshee 1.0.0
Banshee is one of the best GNOME players out there, and the last release, 1.0, brings lots of improvements and new features. Banshee benefits of Last.fm integration and song submission, music and video libraries, plenty extensions which extend it and increase it's usefulness. Along with the new release, Banshee also benefits of a brand new website, with a good-looking design and easier to navigate.
Official Website 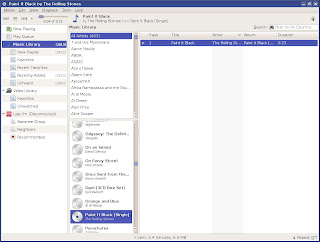 JuK 2.3.5
JuK is part of the KDE multimedia package. When JuK first starts, it will prompt you to select the folder in which your music collection resides, then it will scan the directory for all the audio files. JuK is a KDE application, lighter than Amarok, but also more poor in features. 'top' shows that JuK uses about half of the amount of memory which Amarok uses, but this comes, of course, at the expense of features. This light player can be embedded in system tray and can be successfully used by persons who don't really care much about audio collection management or advanced features. It does a perfect job for its purpose.
Official Website 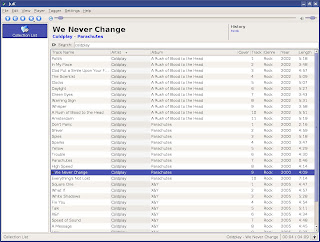 Beep Media Player 0.40.14
Beep Media Player (or BMP for short) used to have an interface similar with the older XMMS. However this changed, and now BMP features a solid interface, more appropriate for a player which includes Last.fm support and a Jamendo music shop. The first impression when I started BMP was quite a good one. Its interface is simple, clean and intuitive with category tabs in the left and artists, albums and playlist at the right side.

Adding audio files to the collection may be a bit confusing at first, since it is done via the Preferences -> Library tab. The Preferences window can be found in the BMP menu. BMP became unresponsive when I hit CTRL+A to select all the available albums in the collection and I had to kill it. Overall, BMP made me a good impression, however it has some stability problems. A good player nevertheless, and a plus is that it is very fast.
Official Website 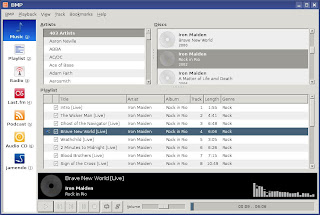 Audacious 1.4.6
A fork of BMP, Audacious is a GNOME player which resembles XMMS, but using newer GTK libraries. It features everything XMMS features, like support for Winamp 2.x skins. Very rich in options, Audacious can be expanded through various plugins. It is lighter and has a different approach than the players using a collection manager.
Official Website 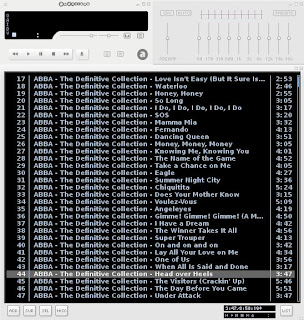 Exaile 0.2.11
I even now remember an immortal thread in UbuntuForums announcing Exaile when it was a brand new audio player for GNOME, about 2 or maybe 3 years ago. Though I've never used it more than 5 minutes, I took it for a test especially for this review.

It will prompt for the collection directory as soon as it starts and scan all the files in it. It has a clean and common layout for a GNOME audio player, with tabs on the left and playlist on the right of the main window. It features a file browser and smart playlists, providing automatic playlists for top 100 songs, highest rated, most played and several other categories. The on-screen-display and built-in Last.fm song submission are also two features which are not to be neglected. A good player I'd say, which makes me put it in the same category as Banshee. They look similar, at least to me. The official website describes it as a player which aims to be GNOME's counterpart to Amarok. Although not yet there, Exaile will definitely evolve into a top audio player for Linux.
Official Website 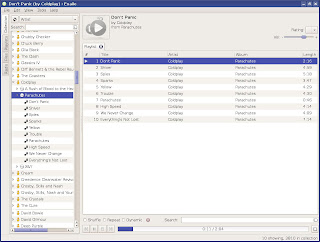 Rhythmbox 0.11.5
Rhythmbox is the official GNOME audio player. It comes as the default audio player in many distributions, including Ubuntu. It features Jamendo and Magnatune music stores and organises your music by artist or album. It also has a comprehensive help system. I found it slower than the other GNOME players though. A good feature is the ability to download torrent files from Jamendo and get the whole album freely using a BitTorrent client. Rhythmbox includes many plugins, including a Last.fm song submission one. It was the most stable GNOME player tested here.
Official Website 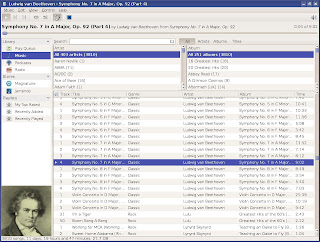 Listen 0.5
Formerly promoted under the slogan 'Lecteur de musique', Listen is yet another GNOME player, made in Python. It can fetch album covers from Amazon or Google Images, has Last.fm support, can retrieve artist, album or song information from Wikipedia, it can fetch lyrics for the currently playing song. Listen also benefits from OSD (On-Screen Display) and it has some handy options like 'Start minimized' or the option to watch the library for modifications. You can also change the colours used to display the lyrics. Bottom up, Listen easily competes with most of the other players included in this review.
Official Website 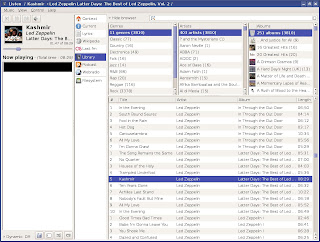 Quod Libet 1.0
Like Listen, it's made in Python using the GTK library. It comes with over 30 configurable plugins, which can turn it into a powerful audio player, and the Audioscrobbler (now Last.fm) submission is available via one of the plugins. It automatically detects the cover in the album's directory (tested for the name 'cover.png') and allows browsing of the library. Can retrieve lyrics too.
Official Website 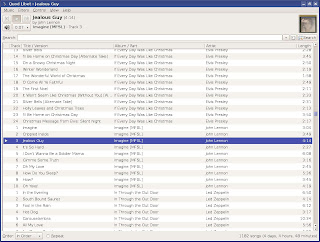 Songbird 0.5
The first thing that jumps into attention is the integrated web browser, which resembles Firefox. It allows you to enter any web address, making it easy to search the web for song information or lyrics from within Songbird. This definitely is a big plus for Songbird. The library looks exactly like the one of Listen's, showing artists and albums, and replacing the Genres section with a Years one, so that you can browse your entire collection by year. You can choose 1973 for example, and the playlist will automatically show only the songs released in 1973. Songbird takes advantage of the integrated browser to include links related to the project, like the Developer Center or the very useful Report a Bug link. This definitely makes it easier to easily file a bug report when you encounter something wrong with Songbird. A great approach, if you ask me. The idea to use a completely integrated web browser into an audio player can prove very useful if well done. This, of course, comes at expense of speed, Songbird being very slow, and this can be observed in the delay the interface is responding. One more advantage Songbird has is that you can download the binary from the website, so there's no need to compile it, but run it directly.
Official Website 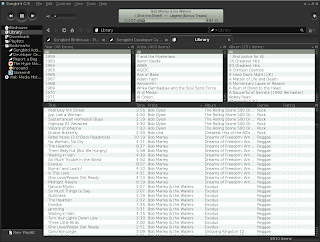 Nice list of audio players. My favorite is also Amarok, being the most full-featured. However, I think it's best for organizing your mp3s and not as good for listening to online radios, for example. Despite being quite recent, and still with a few sharp edges, I like the different aproach Songbird is taking

dont like all those bloated collection-database-sell-you-some-music-online-itunes-players. used to like winamp on windoze back in the day. then xmms. now audacious all the way!

Wow. I never thought I'd see the day when XMMS doesn't even make it to the list. What happened to them? They were at one time the pinnacle of media players for Linux...

Well, XMMS is considered to be obsolete by several big distributions like Debian due to the fact that it uses old GTK libraries. It has been replaced (successfully in my opinion) by Audacious. XMMS is still a strong player even now, but I preferred to only include and review Audacious.

Sonata(mpd frontend) is much better than xmms and audacious.I love it.

Amarok is my preferred audio player, very intuitive, just does its job nicely (though a bit resource grabbing).

nice review, i didn't read thoroughly yet, once i did i'll add my impression about the best audio player

I like XMMS, i find in Slackware, it's a nice player for the equalizador of 31 bands :)