Introduction
Since Amarok 2 is on its way with all the fuss around it and the currently stable 1.4.9.1 version will probably be the last in the 1.x series, I decided to make a review of the last stable Amarok. Debian Lenny will ship with this version (or any later version before Amarok 2), perhaps making it the most stable Amarok experience up to date. 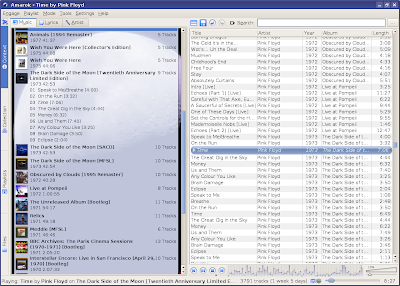 There is so much to say about Amarok that I could not possibly include in this review each and every feature it comes with, so I will try to only cover the highlights. Amarok is one of the most loved audio players for Linux; it's been around for several years and it practically includes any feature one could ask from an audio player: from collection management and statistics, scripts, cover fetching, lyrics fetching, Wikipedia tab for artist/album/title, Magnatune Music Store, to Last.fm song submission, visualisations, ratings and many, many more.

Starting Amarok
When you first start Amarok, it will pop up a wizard where you will be able to set some options and to select the desired directories to be scanned for audio files which will be included in the collection. It provides three database types, and the default one is SQLite, which needs no further configuration. 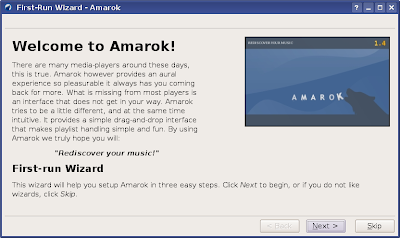 Interface
The way Amarok's interface is organised is pretty simple, having two major sections. The first one would be a section which contains several tabs like the Context (which includes the Music tab - for general information about the artist, album and song, together with automatically cover fetching from Amazon.com; the Lyrics tab - for retrieving song lyrics, it can use different scripts to fetch the scripts from several sites; and the Artist tab - which allows you to fetch information from Wikipedia, with very good HTML integration). 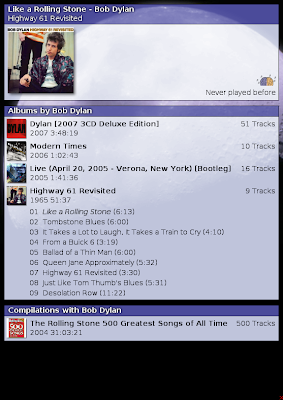 The second section is the playlist, allowing you to show many fields like Artist, Title, Album, Bitrate, Year, Length, Directory and many more. Virtually, any information that can be retrieved from a track at a given time. At the bottom lie the control buttons, including Next and Previous Track.

Collection Management System
Amarok offers a great collection management system, by scanning the directories where your music is located and organising it in albums, year of release, and so on. It can fetch covers from Amazon.com or can detect files like cover.png or front.jpg in the song's directory and automatically set it as cover. It also offers a localised place for viewing and managing all the covers, known as the Cover Manager.

The cover manager - covers can be fetched from Amazon.com or from the song's directory (click to enlarge) 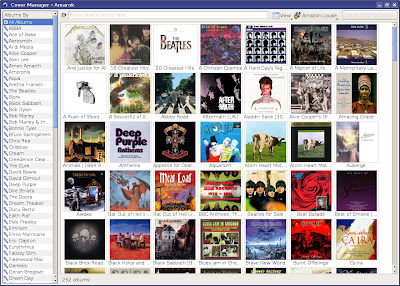 Amarok includes a complex statistics and a rating system, offering the possibility to show the most played tracks, favourite tracks, favourite albums and genres. Statistics will also help later when creating smart playlists, which allow you to only load several songs complying with certain rules, like never played songs, or most played etc.

Tag Editing
The Amarok tag editor offers a very fast way to fill in the missing tags, being able to fill commune tags like Artist or Album for more than one track in a single edit action. It also provides the option to fill the tags using MusicBrainz. A good thing is that after you open the tag editing window, you can click on Next (or use ALT+N) to go to the next song, without the close-save procedure other players have, and save all the edits when you are done, in a single action.

Last.fm Song Submission
One nice feature implemented in Amarok by default (there's no need for any additional script) is the Last.fm song submission option, available via the Configure Amarok window. It can also retrieve similar artists from Last.fm and list them in the Music tab on demand.

Can be expanded using various useful scripts
Some of them really make your Amarok experience even better, like the LyrikiWiki script (which fetches lyrics from several complete lyrics websites) or the ConTEXT script (which searches in the album's directory for text and HTML files and displays the content in the Context Browser). 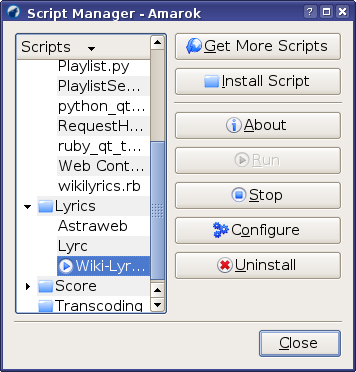 Many other features
It comes with an integrated file browser, which allows to easily populate the playlist by dragging and dropping files. The Collection tab allows to group your entire collection by many rules, like Artist / Year - Album, making it extremely easy to find anything very fast in the collection (given that the tags are properly filled up). Amarok also offers support for iPod and several more MP3 and OGG players, together with a Magnatune music shop, the popular service for music licensed under a Creative Commons license. Collection statistics, dynamic playlists, ratings and scores are another plus. Especially dynamic playlists are very useful when you need to rapidly create a playlist which respects certain rules, like never played songs, or random songs and so on. And these are not even all the features. 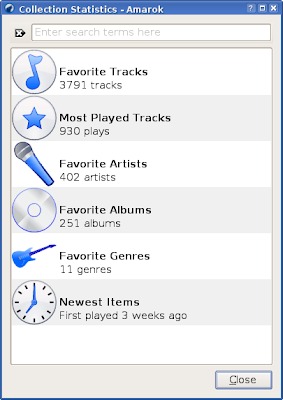 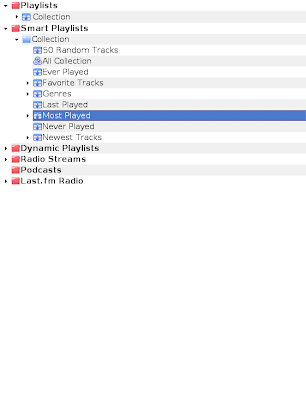 Configuration
Amarok is highly configurable, allowing new themes to be installed (which will be displayed as a background in the context browser), together with font size and colours. The default database for the music collection is SQLite, but you can select MySQL or PostgreSQL, which are faster, but need further configuration. Guides are available on the official Amarok Wiki. 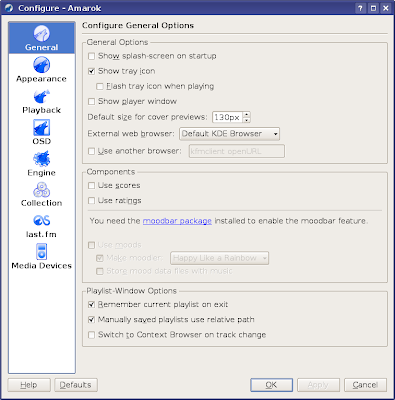 Community and Development
I like that when a new version of Amarok is released, the front page also includes a nice concept picture, emphasising the release. A new version of Amarok is released on a regular basis, and the currently 1.4.9.1 seems rock solid to me, and I use it on Debian Lenny for several months (I'm talking about 1.4.9.1 and 1.4.8 versions). Through the forum you can submit feature requests and discuss general aspects regarding Amarok, including scripting and artwork.

Conclusion
With so many nice features, well implemented collection management system and a unique audio experience, I must say Amarok is a top audio player for Linux, if not a top audio player in existance. It's a must-have-installed application for any audiophile using Linux.