Introduction
Following audio players reviews like this or this, today I decided to review Rhythmbox 0.11.5, the GNOME audio player.

At first glance, Rhythmbox made me a good impression: the layout is simple and clean, similar in many ways to many other players for GNOME, like Banshee, Listen or Exaile. 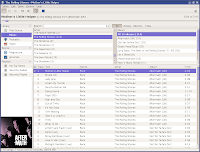 Features
To begin with: it features a library which includes all the music you added, a play queue, and tabs for podcasts, radio and the Last.fm service. The library is organised in three sections, for artists, albums, and the list of all songs. Clicking an artist will only show the songs by that artist, and the same goes for albums. Podcasts and radio features are typical, with nothing special or any uncommon stuff, and the Last.fm tab provides only a way to play Last.fm radios, showing nothing about your favourite songs or artists. But it's fine, if you plan to use it only to listen to music. It's a music player after all, right? 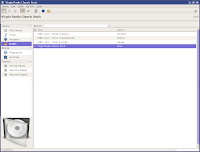 Song properties - you can edit the tags here 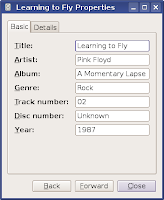 Magnatune and Jamendo integration
The nice thing I liked about Rhythmbox was not necessarily the integration of both Magnatune and Jamendo music stores, but the possibility to listen to music featured there and moreover, download a torrent file from Jamendo in case you want to use later a BitTorrent client to get the whole album. It's nicer and faster than bumping into an album you like and then opening your browser to download it. 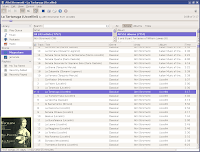 Playlists and cover fetching
Default playlists include top rated, recently added and played songs, and you can create your own. Rhythmbox searches in the album's directory for covers and shows then when it find them (I tested this for 'cover.png'). I'm sure it works for any of the common names like 'cover.jpg' or 'front.jpg'.

Plugins
Even though at first Rhythmbox may not look as feature-rich as other players, you'll definitely like it more when you'll bump into the plugins. It comes with several useful plugins. To list some of them:
- Cover art - fetch album covers from the Internet
- FM Radio - support for FM radio broadcasting services
- Jamendo and Magnatune plugins
- Last.fm - for song submission at Last.fm
- Visualization - display visualizations
And there are several more, very handy when needed.

Preferences
The Preferences dialogue allows you to change the browser views, add or remove visible columns from the playlist and configure podcasts. 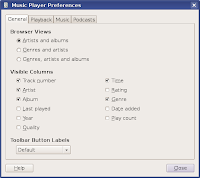 Conclusion
I like it. I consider this fine application a complete audio player, featuring all you need to get a good audio experience. It's pretty stable, even though a little slow (sometimes it hangs for 1-2 seconds - on a 1.8 GHz Core 2 Duo machine) but that is not necessarily a problem. A good player, probably the best from all the GNOME players I tested until now.
Posted by Craciun Dan at 23:15

I agree, the best player on the GNOME Environnement :)

me too. Consumes less memory than the rest.
It works like a charm