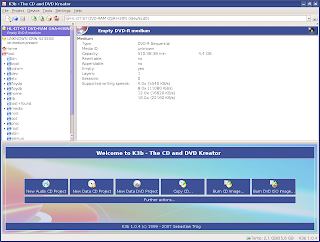 'The CD and DVD kreator', as the author calls it (the 'k' in kreator emphasizes the fact that K3b is a KDE application), is a complete burning program for Linux, with all the features you need to start backing up your data.

It can also be used to create ISO images, K3b taking advantage of the 'genisoimage' tool to provide this feature. Among the many other features K3b includes are: multisessions, support for Linux and Windows filesystems or the possibility to automatically erase CD-RWs and DVD-RWs when they are inserted, OSD (On-Screen Display). 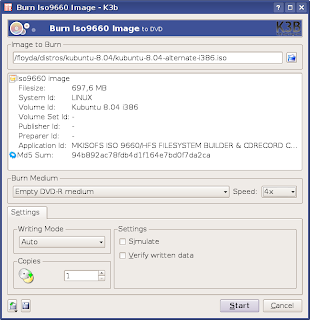 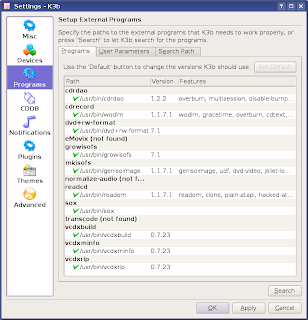 K3b provides most of the functionality any proprietary burner offers, with the advantage that is cost-free and open source. The well-known closed-source burning application for Linux is Nero, which was relatively recently released for Linux as well. 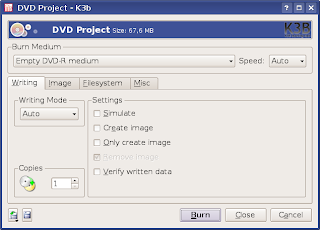 It has a rich configuration options via the Settings dialogue. It supports themes and CDDB configuration, together with other handy options. K3b also benefits from notifications, which are rather annoying in my opinion. However, when you're not at the computer and want to know when K3b finished writing your CD, this feature can prove useful. It also provides a DCOP interface, which allows to control K3b from command line or another application. 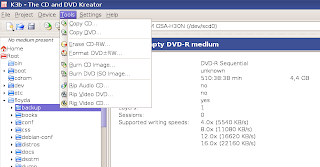 Help is available offline in K3b's Handbook, but it hasn't been updated since 2004. The official homepage has no forum, however a FAQ and a short guide to the DCOP interface are available. Frankly, I really don't think there's a big need for help files while the interface is so simple and intuitive.

The latest stable K3b version is 1.0.5 and you can get it from the official website. Work is also in progress for the KDE4 port, which is scheduled to be the next release, 1.1.

As a conclusion, K3b has all the tools you need, it does its job very well, is mature and stable, and development started at the KDE4 port. K3b is definitely one of the best Linux burner applications out there.
Posted by Craciun Dan at 15:28

I've used K3B ever since I left the Windows world, and just love K3B. It does everything in the way of burning that I can imagine, and is very intuitive.
Thanks so much to the K3B team!!