1. APT
APT (Advanced Packaging Tool) is Debian's package management system. Installing an application is as simple as 'apt-get install amarok' and fetching all the updates can be done with 'apt-get update && apt-get upgrade'. Of course, there are APT frontends like Synaptic, if you're more comfortable using a graphical application. 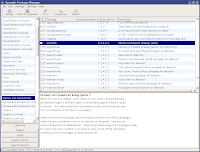 2. Community
Community is great, and I'm talking about both the forums at forums.debian.net and the official #debian channel on OFTC. Debian still has a channel on Freenode, which actually has more users than the official one (an average of 800 compared to 350 on OFTC).

LE: I almost forgot: mailing lists are another way of getting responses to Debian problems and discuss any aspect related to it.

3. Releases are rock stable
The release cycle is slower than other distributions, but the applications included in a new release are well tested and stable. You have the certainty that if you install the Debian stable release, you can trust it for security and stability, which makes it very fit on servers too, not only on the desktop.

4. It's been around from the beginning
If I'm not wrong, Debian and Slackware were the two big distributions which started just after the first version of the Linux kernel was released. What advantage constitutes this? Well, the community is comprised of both new and older, more experienced users; there are probably hundreds of projects out there based on Debian, which can only contribute to it (take Ubuntu for example). 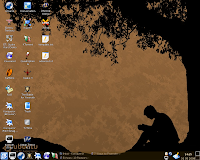 5. Debian usually ships with default settings in applications
So you will be able to start from the same default configuration and make it work your own way. I like this one because I usually like applications like Konqueror for example to come with their original default settings, and if I want to configure it another way, I can do it manually. Debian gives you full control over this.

6. It supports equally both KDE and GNOME
In fact, it supports any desktop environment equally since others, like Xfce, are also included in the repositories. This means no package is left behind or ignored, they are both tested to be stable and bug-free when a new Debian stable release arrives.

7. I got used to it
This is a more 'personal' reason: since my first distribution was Ubuntu, then Kubuntu and finally Debian, I got used to it. I think it wouldn't be hard for me to learn using emerge or rpm, but I'm more comfortable in something which I already know how to use.

8. I like the name
'You call this a reason?', you may ask. Yes! Actually, I was thrilled when I found out what Debian stands for - it's a combination of the names Ian Murdock (founder of the project) and his then-girlfriend, Debra. Hence, Debian!

9. Development model
I like that you can choose what version you want to use. If you really need well-tested software and the best security you can get, use stable (currently 4.0, Etch), if you want newer packages, then use Testing (currently Lenny).

10. Documentation
Debian is one of the few distributions which benefit of hundreds of dedicated websites with documentation, not to mention personal blogs. The official documentation found on Debian's website is also abundant, and I always take a look there every once in a while. And, I almost forgot it: there is the Wiki, there are the forums, and there is IRC (#debian on OFTC). And if you really need an answer very fast, you can always try the UbuntuForums, since most of the solutions provided there work flawlessly in Debian.
Posted by Craciun Dan at 13:04

I understand your feelings abour Debian
I know Debian and i have been courting it from the age where one had to be a computer genius to install ir properly.
Today it installs better and discovers hardware in a most civilised way.
I still find it Spartial in a sence compared to Mandriva or Opensuse or even to any one of the Ubuntu family except Xubuntu.
I am glad to see that it is still strong ( 7th on Distrowatch) and enjoys a strong developer and fan community not to mention its progenity...
Your's Truly
Bertrabd D. Beaudoin
oui-yes.net
info@oui-yes.net

It has all the reasons to be strong. Even though Distrowatch only shows (as far as I know) people who accessed its homepage via their link, not necessarily the percent of people using it. But it's pretty close anyway, I'm sure.

I like AND/AND and WIN/WIN situations. I download and test them all on several systems, and which ones do I like?
MEPIS7 (DEBIAN) because it is complete, logical and very stable
MINT (*BUNTU) because it is like MEPIS, but the goodies are more daring and eyecandy
GRANULAR1 (PClinuxOS, Mandrake), because it runs on every system, while MEPIS and MINT do stall on VIA/ATI systems, and no way around that problem.
PUPPY4, which is amazing, but not liking WINE, it is a puppy and not a full grown.

Well, Mike loves debian and don't we all ?

I use ubuntu and most off your reasons work for ubuntu too. I respect Debian project and i know that almost all ubuntu packages are pulled from debian.

Hey! Lenny is stable (xD)...almost.
What i love about debian is the gay logo, because you go around there with the Debian logo in your backpack and someone asks:"WTF is that? Are you gay?" and you answer: "No, its just that i don't crack-patch things, i use linux"

PS: UrT, the best game of all!

UrT, Urban Terror right? Man, when I first started to play that game I fall in love with it right away. I was looking for some Counter-Strike replacement on Linux and UrT was perfect. Allow me to say, Urban Terror pwns :-)

I love your wallpaper, could someone please post here a link to it? Thank you in advance!

Out of interest, what made you switch from Ubuntu (and Kubuntu) to Debian? I'm suspecting stability, but I'd be intrigued to know if it is anything else?

I like that Ian gets it, Deb's name is first. That's one marriage that will last.

The thing i like about debian as opposed to ubuntu and kubuntu is I don't have to go through grief every time i want root access. I muck around with software all the time and easy root access is important to me.


However I do accept that ubuntu and kubuntu tend to bit a bit better on hardware detection.

What the hell, its a great distro