Command line is known to be the most powerful way of doing things on Linux. Even though there are GUI tools for almost any task, doing them in the shell is most of the time faster and easier. Not to mention there are so many CLI tools out there, you only have to build a graphical interface in order to use them. It is also the most common way of spreading tutorials or helping new users, since it's less bandwidth consumptive (no screenshots, no explanations like 'go there, click on that, not that, the one below it').

So, here are the most popular terminal emulators for X:

Konsole
Konsole is the KDE terminal application. It can be configured in many ways, supports transparency (for desktop only), background images, encoding, pre-defined colour schemes (you can make custom ones), tabs (so you can have several sessions opened without the need to open another Konsole), and it's very rich regarding the configuration options. 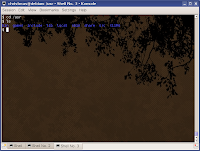 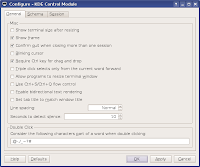 Editing your profile in Gnome Terminal

Yakuake
Yakuake is yet another terminal emulator for KDE. When I first started it, a notification balloon appears saying to press F12 in order to start it. Yakuake is always on top by default, but the nice thing is it disappears when you press again F12. So you can have a shell started all the time, which doesn't annoy you, use it on demand by calling it with F12 and then sending it back in the background. 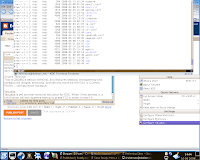 You can configure Yakuake to change its size, be always on top or not, and you can disable the notification popup when it starts. Several more options are available. 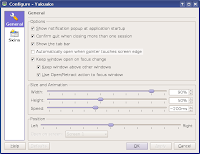 XTerm
XTerm is the smallest one, providing only a window with the size of 80x25. XTerm can be configured from command line. Though I rarely use it, I'll look into it and eventually post a how-to for those interested.

Eterm
Eterm is yet another terminal emulator, with a futuristic theme. It integrates well if you are an eye-candy person, but otherwise, I recommend the use of a classic terminal. The thing about Eterm is that you'll have to launch it as Eterm from command line. That's right, the E is uppercase.

Several more
Some more terminals for X are Tilda, ROXTerm, rxvt, wterm. By the way, did you ever wonder what rxvt stands for? According to the official website, it's an acronym for our extended virtual terminal.

You forgot unicode-rxvt probably the best one out there.

Yes urxvt is really impressive! Light and fast, and can also be ran in client server mode.

I still find it remarkable how many resources these applications require. I mean, Xterm starts extremely quickly; but others like Konsole, Gnome-Terminal and Terminal from Xfce take tremendously long to start.
Usually, I just use Xterm, but when I need to do some mousing to copy a section, it just takes ages to start - even if the native environment is already loaded; even with a full KDE, Konsole takes long to start up, and the same goes for Gnome-Terminal in Gnome.
I wonder why? It is just a terminal emulation - BASH in a window.

Nice additions, thanks for this good feedback.

i hugely enjoy tilda - theres some kde equivalent as well - which just pops up upon pressing F1 as it remains preloaded.


@mjjzf I still find it remarkable how many resources these applications require... ...Konsole, Gnome-Terminal and Terminal from Xfce take tremendously long to start.

You have got to be kidding. The very _first_ time (after a fresh reboot) you start up any terminal emulator is will take a little time to load. Every _next_ time is within an eyeblink, at least on a AMD3400+ with a Gig of ram.

If _all_ your terminal emulators take a long time to load, _every_ time, you've been mucking about in your system.

@mjjzf: agree. Urxvt (my favourite) and Xterm both use less than 10MB/5MB of memory, but Xfce4-terminal uses 60MB/19MB, and I recall Gnome-terminal and Konsole needed alot of memory too. Such a waste.

@Jaap: Don't tell me to add more ram. That is not a sustainable solution. Apps must be careful with their resource usage.