The last Wine review I made was for 1.0RC2 (release candidate 2), in which I already tested World of WarCraft, mIRC and DC++. I had no issues with World of WarCraft (tested using a trial account) which performs very well, without any visible problems, DC++ has minor stability problems and the mIRC scripts editor crashes, but otherwise, mIRC behaves good enough.

World of WarCraft - probably the most popular MMORPG out there 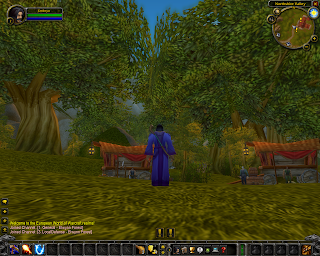 A little more about mIRC
As I already said in the previous Wine review, there is no point to use mIRC when there are native powerful IRC clients on Linux like XChat, KVirc or Irssi. But it comes useful when you just made the switch and you have a whole bunch of mIRC scripts you don't want to rewrite immediately.

mIRC 6.32 performs quite well, except for the scripts editor which crashes 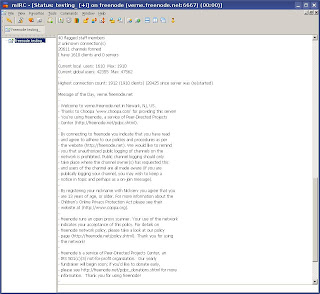 Well, 1.0 fixes some of the mIRC issues: the script editor doesn't crash the first time you'll start it, but only when selecting the Remote tab. But I did this: I tested an old mIRC trivia bot which I've done a long time ago, when I was using Windows. Instead of loading the files from within the scripts editor, I just copied the scripts and the mirc.ini files into ~/.wine/drive_c/Program\ Files/mIRC. The mirc.ini file also contained several lines specifying what scripts mIRC should load, lines looking like this inside the [rfiles] section:

It works flawlessly this way: just don't use the scripts editor. The latest mIRC version I tested was 6.32.

I'm curious about how that Valve code porting to Linux will turn out, but until then, I can tell that both Half-Life 2 and Counter-Strike 1.6 work very well using Wine 1.0. Half-Life 2 is just a little slower than on Windows, while Counter-Strike 1.6 offers less FPS (frames per second). But if you used to play at 70 FPS on Windows with a, say GeForce FX5900, you'll easily reach around 60 FPS on Linux with the same video card.

I also tested Championship Manager 01-02 and Championship Manager 02-03 (aka CM4). They work flawlessly using Wine. And it's better to have it that way, since the only decent football simulator on Linux that I know is Bygfoot, which is very poor in features compared to these two commercial ones. I didn't test any later versions of the above mentioned games, but I'll give it a try as soon as I'll get one.

Wine 1.0 in its splendour 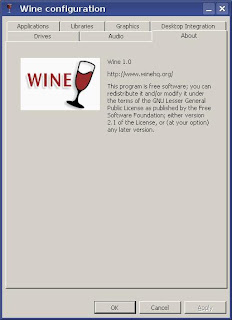 As a conclusion: for those who really need Windows applications, Wine is a very good solution. The official website includes an applications database, with testing results for each of them and how well they perform.

Problems with unicode. The Ubuntu 8.04 version of Wine 1.0 cannot display all the unicode menu and most of the dialog messages. Strange enough is it can still display one or two dialog messages. Unicode data files also have problems. A unicode dictionary compiled on XP is not recongized by the associated software (haalireader). Most probably the leader byte in the data file is not being recongized as an unicode indicator.