I started to play Quake 3 soon after its source code was licensed under the GPL. I must admit, I didn't play it from the beginning, and I'm at best a good player, but I always enjoyed playing online some classic mode.

The servers are not that crowded, at least not as they used to be, but, considering it's almost 9 years old and still active, it's one of the games which will never die, which will always have both new and older, nostalgic players. 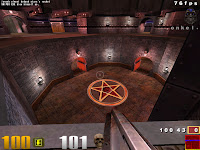 The best move id Software (the company who developed it) was to release the source code under the GPL. This rapidly allowed several projects to use it and modify it, and it gave birth to a whole bunch of new games.

There are several popular games based on the Quake 3 engine, to mention just a few: Urban Terror, AlienArena, OpenArena, Tremulous. All of them are native for Linux.

Gameplay
It features 4 default modes, Free for All (FFA), Team Deathmatch (TDM), Deathmatch (DM) and Capture the Flag (CTF). Many more are available, and the most two popular are Excessive and FreezeDT. Excessive usually features all the weapons (or only the Railgun) with very increased power and the ability to jump higher many times. It's a good mode once you master it, but I don't like it because it seems only 'spamming' to me. In FreezeDT you freeze an opponent when you shoot him, and once your team freezes all the players in the other team, you'll win a round. Friendly frozen teammates can be brought to life if another player in the same team stays close enough for a certain amount of time.

Quake 3 was intended for online multiplayer games, but the single player is competitive too. The AI is smart enough and can offer a good enough single player experience. 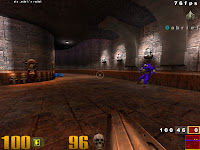 Single player in Capture the Flag 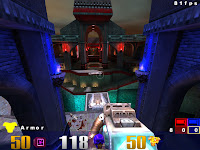 It's very fast: most players say it has a faster pace than Unreal Tournament, which is well known for its dodges and jumps which can make a skilled player dance inside a vast area in a matter of seconds. It features 10 weapons carefully chosen. 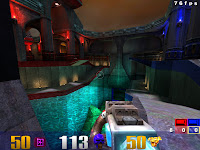 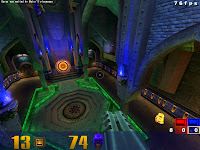 Conclusion
Another favourite on my list. The only problem I've got was lack of servers with classic modes (the Excessive servers are usually full, but I don't really enjoy this mode that much). A true classic, which really doesn't look like it's going to leave us too soon.

Edit: Quake 3 is no longer updated, but since it has been licensed under the GPL, a project called ioQuake3 took the source and started to clean out bugs. ioQuake3 is practically Quake 3 with updates to date. You can get it from the official ioQuake3 website.

Yes. The one pointed out by szmergiell is for OpenArena, which is based on Quake 3. Here is the link to ioQuake 3, which is exactly Quake 3 with all the bugs fixed. Since it's been GPL'd, this project took the source and started cleaning out bugs. You will also need the original CD in order to copy the pk0.pk3 file, or just borrow free pk3s from games like OpenArena. It worked for me.

you can install it in ubuntu this way